In 1947, two years after the end of the Second World War, the United Nations decide to split Mandatory Palestine in two States, a Jewish one and an Arab one. In the portion under jewish control, the new residents almost systematically send away christian and muslim palestinians, 418 palestinian villages are destroyed and 760.000 Palestinians are forced to flee into exile.

In September 2014, OFCI visited a few refugee camps in Lebanon. We soon took notice of the state of hopelessness among the population, due to the lack of resources provided by the NGOs and by the international institutions. To top that, the extremist tendencies that often result from despair make it so that the camp periodically becomes a conflict field which sees new terrorist groups opposing the authority of the Palestinian security forces. In such a harsh environment, the refugees have to deal with the absence of educational structures, with a state of generalised violence and with unemployment. Given such a dramatic situation, OFCI, in collaboration with the palestinian association Nuwat Center For Social Solidarity based in Lebanon, started developing an experimental, socio-educational program which encompasses three facets. This experiment will be carried out until October 2017 in Ain Al Hilweh, the biggest refugee camp in Lebanon, located on the outskirts of the city of Saïda.
Among the three aspects of the project, the first has an educational nature: we aim to provide scholastic support five times per week for about 30 young people in subjects such as Arab, Maths and Sciences.
The second aspect targets younger children for whom we will organise leisure, recreational and psychological support activities.
The third aspect focuses on sport, with the objective of setting up a men’s and women’s rugby team.
Why organising just one crowdfunding campaign for three different objectives, you may ask.
We think they complete each other and concur to the realisation of the global project. It’s then necessary to finance all of them together at the same time.

◦ To educate the young refugees on the value of art as a mean of expressing oneself.
◦ To offer a much needed moral support to those children who have been worst psychologically affected.

‣ To give the students the possibility of successing in their studies through a non formal and personalised didactic support.
‣ To boost young refugees’ self-confidence through rugby training.

⁍ To equip a great number of young refugees with new learning strategies, in order to emancipate them from traditional pedagogical methods.
⁍ To strenghten young refugees’ hope in the future by helping them in finding an employment or in setting up a business.
⁍ To let young refugees play in rugby national and international championships representing the Ain Al Hilweh camp. 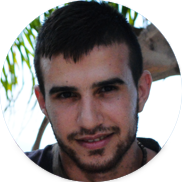 Jalal met the OFCI for the first time in September 2014, during our mobilization in the camp.
As a volunteer member of the Nuwat Association, he’s responsible for the coordination of the many phases of our socio-educational project.
Jalal, together with other members of the association, will take charge of our group, in order to give us the possibility to work in the best possible conditions and to meet as many local actors as possible. 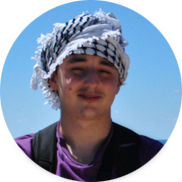 At first president of the OFCI, Youri becomes Project Assistant of the association in June 2016. He was part of the small delegation who visited the palestinian camps in September 2014. It was in this occasion that he met Jalal.

How are we going to use your donation?

Since the project already started in January 2017, the association had to put in advance a large sum of money, using its own financial resources. We’re going to run out of them soon, though, which forces us to ask for your support to keep the project going.
We make a pledge to use your donations for the benefit of the people of the camp and we’re actively working for the professionalization of the palestinian volunteers through State and private grants. We also pledge not to recur to the classic crowdfunding platforms, like Ulule, to cite just one example, since they’re especially expensive and charge 5% to 8% in fees on the total amount donated. By using our own platform, we cut such fees to the minimum, 2%, this way avoiding that your donations are used to fund an intermediary platform.
Your donations will finance the school material, the art and sport supplies, the office equipment and the recreational activities. They will also cover other expenses, such as the costs of transportation of our volunteers and their groups during outdoor activities, the psychiatric and psycological support and, finally, travel, food and accomodation for qualified sport trainers.

To express our gratitude !

Symbolic Support (5 €)
You will receive our warmest “Thank You”!

Half-Time (10 €)
Together with our thanks, you will also receive a postcard sent directly from Lebanon.

Forward ! (25 €)
In addition to all the other gifts, you will also receive :
– The OFCI documentary in the palestinian camps of Lebanon on DVD or on a USB drive (your choice).

Unstoppable ( 50 €)
In addition to all the other gifts, you will also receive :
– 1 OFCI t-shirt (Ain Al Hilweh special edition).
– 15 Photos taken in Ain Al Hilweh, glossy paper, A-4 format.

Supporter (100 €)
In addition to all the other gifts, you will also receive :
– An invitation to an OFCI dinner at a palestinian restaurant in Lille, France.
– A book of palestinian, lebanese and syrian recipes.
– 1 traditional hand-made Keffieh, crafted in the Ain Al Hilweh camp.

Elite Supporter (200 €)
In addition to all the other gifts, you will also receive :
– A rugby ball with a dedication written on it by the players of our Ain Al Hilweh team.
– A compilation of the best palestinian, lebanese and syrian songs on CD or on a USB drive (your choice).

Honorary Citizen (500 €)
In addition to all the other gifts, you will also be able to :
– Ask 10 questions on international current events and receive detailed answers by our experts.

In addition to all the other gifts, you will also receive :
– A traditional hand-made palestinian dress (Men or Women), made in Ain Al Hilweh camp (size of your choice).

In addition to all the other gifts, you can join us on our next mission in Ain Al Hilweh, if you wish (the flight costs to Beyruth are not included)

The sending date of the gift is estimated
to the 15th October 2017.
According to your country, you migh
have to add shipping fees.
Get in touch with us
for more details : youri.bergoug@ofci.fr

Even if you don’t wish for a compensation, you can still make a donation (a sum of your choice).

If you’re a tax payer, get informed about your tax deduction legal frame concerning donation to nonprofit in your country and take advantage of it !

This website uses cookies to improve your experience while you navigate through the website. Out of these, the cookies that are categorized as necessary are stored on your browser as they are essential for the working of basic functionalities of the website. We also use third-party cookies that help us analyze and understand how you use this website. These cookies will be stored in your browser only with your consent. You also have the option to opt-out of these cookies. But opting out of some of these cookies may affect your browsing experience.
Necessary Toujours activé
Necessary cookies are absolutely essential for the website to function properly. These cookies ensure basic functionalities and security features of the website, anonymously.
Functional
Functional cookies help to perform certain functionalities like sharing the content of the website on social media platforms, collect feedbacks, and other third-party features.
Performance
Performance cookies are used to understand and analyze the key performance indexes of the website which helps in delivering a better user experience for the visitors.
Analytics
Analytical cookies are used to understand how visitors interact with the website. These cookies help provide information on metrics the number of visitors, bounce rate, traffic source, etc.
Advertisement
Advertisement cookies are used to provide visitors with relevant ads and marketing campaigns. These cookies track visitors across websites and collect information to provide customized ads.
Others
Other uncategorized cookies are those that are being analyzed and have not been classified into a category as yet.
Enregistrer & accepter