Getting Around in Lille & Roubaix

While Lille does have an airport in Lille-Lesquin, it is very small and does not operate many international flights so it is often cheaper and more convenient to fly to Brussels. There is a cheap shuttle service named Flibco which takes passengers directly from the airport to Central Lille.
Thanks to the fact that Roubaix is situated in the Metropolis of Lille, there are a number of useful transport links connecting Roubaix to Central Lille as well as other parts of France and Belgium. Roubaix is served by the Lille metro system as well as buses, a tram and a SNCF TER train station.
Here at OFCI we are a stone’s throw away from Roubaix Charles de Gaulle metro station (under 10 minutes on foot) from which one can travel to Lille Flandres or Lille Europe on Ligne 2 Direction Saint Philibert (the red line of Lille’s simple 2 line metro system) within 20 mins. The metro runs very frequently with trains every five minutes (less frequently on Sundays). The main Roubaix train station, which is slightly further away (around 15 minutes walking) is served by an SNCF TER train which travels from Lille Flandres to Roubaix and then on to Tourcoing before entering Belgium, with some trains going as far as Antwerp.
Prices are very reasonable, with student passes being available from Transpole offices for €25 a month which entitle holders to unlimited access the metro, trams and buses throughout the Lille Area. Without a student pass, individual journeys cost €1.65.
Unfortunately, however, the public transport system does not currently operate late at night. After 00:30, for example, the metro and trams do not run so heetch/uber/taxis are often the only viable means of getting home after a night out.
Due to its location, Lille (and consequently Roubaix) are ideal locations for visiting a number of European cities. Brussels, Paris and Amsterdam can all be reached within a couple of hours which is perfect for a day trip during the weekends!
I’m sure you will now agree, Roubaix is a fantastic location to live in and I hope you are now more informed about its range of travel links and opportunities.

Metro and tram discounts for young people available for anyone aged up to 25.

If you are planning to stay in Lille/Roubaix for an extended period of time (1 month or longer) we strongly recommend you invest in the Transpole Youth Card. This is a very good discount that allows unlimited travel on all forms of public transport in Lille and surrounding areas like Roubaix, Croix and Villeneuve D’Ascq – including metro, trams and buses.

The travel card is a plastic card with photograph identification that needs to be purchased from any transpole office – such as at Lille Flandres, Beaux-Arts and Roubaix Euroteleport. If you are staying for 10 months or more you can use direct-debit of 24 Euros per month or a one-off payment of 240 Euros for the full 10 months. If you are here for a shorter stay then it is 29 Euros per month for unlimited travel – which still saves a lot of money if you are going into town a couple of times a week! 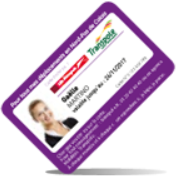 Be warned, the paperwork and process to obtain the card is loyal to traditional French bureaucracy and requires a lot of documentation. This article will show you all the steps you need to take in order to obtain your travel card quickly and in a single trip to the office.

You will need to fill in a form (labelled “4-25 ans”) which can be collected from the Transpole office when you go to present your paperwork. Make sure you take the following documentation:
-A photocopy of your passport
-A passport photo
-Proof of student status (if student)
-Proof of French address

If you take all of this with you, then the process should only take 5 minutes so… make the most of your youth while in France!